Who says Ivy League schools are all work and no play?

Columbia FSAE is a student club that builds an open-wheeled, formula-style race car from scratch every year. Once completed, it competes against schools around the world. In fact, the annual team competition is held yearly at Michigan International Speedway and the team is getting ready to travel there in just a few short weeks.

Historically, EVS Metal has been one of the team’s most important sponsors, says club member Jonathan Yang-Ming Chang, “[EVS’] sheet metal capabilities were instrumental in getting suspension tabs cut and mounted, and this year they created an awesome fuel tank that was not easy to make at all. Huge thanks to EVS; we’re super excited!” As it turns out, EVS was almost as excited as the team to be participating in this year’s car build, and dedicated a number of resources to both the suspension tabs and the designing/fabricating of the “awesome” tank referenced above (we love the enthusiasm!). Here’s the lowdown on that very item from EVS Metal engineering manager, Nathan Lee:

“The top and bottom section of the tank were formed using a technique called bumping, shown here: “Each piece was bumped 76 times to get the final radius, shown here: “It took approximately 4.5 hrs to tack together and weld the seams.” Special thanks to the rest of the EVS team who made this project a possibility:

We’re excited to learn the results of the competition next month. Be sure to come back when it’s over for photos of this year’s finished vehicle in action!

For an additional look at the fabrication process, as well as a glimpse into the Knickerbocker Motorsports shop, check out the following gallery: UPDATE: The parts EVS fabricated can now be seen in action in the great new photos of the car we received yesterday. Check them out! 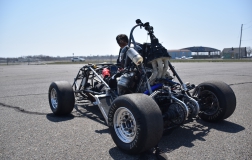